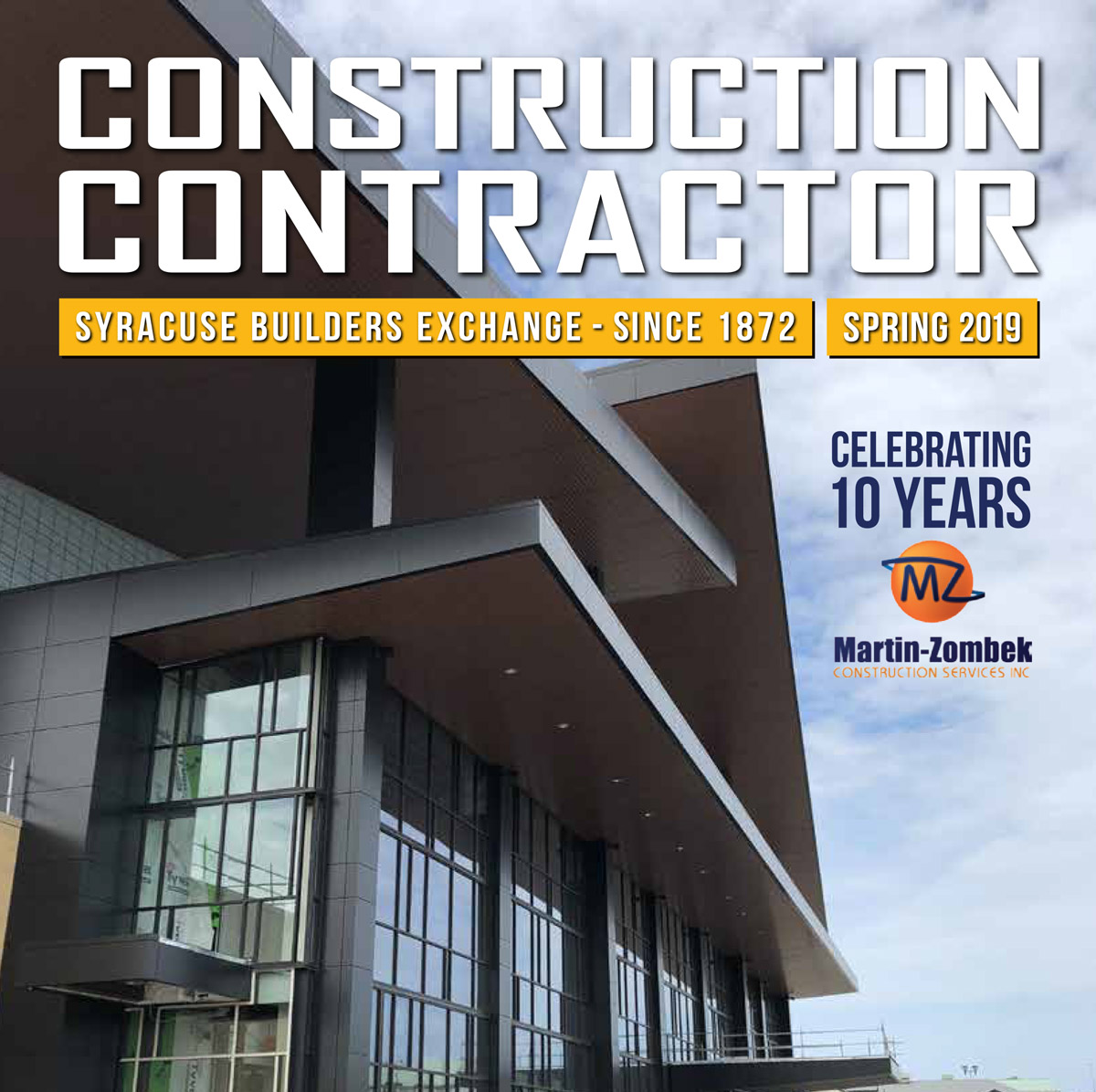 The construction business is constantly changing. To stay competitive, you have to stay on top of the latest innovations.

Martin-Zombek Construction Services, Inc., in Syracuse has kept a finger on the pulse of technology for the last decade, while maintaining a healthy appreciation for its history. That balance of past and future, according to Vice President Andrew Zombek, has helped the company become one of the preeminent contractors in Central New York.

The company was formed in 2009, but its history reaches back much farther. Martin-Zombek’s origins trace back to 1927, when William R. “W.R.” Henderson founded a lath and plaster company. His son-in-law, Lloyd Martin, Sr., joined him in the enterprise, and took over after his father-in-law’s death in 1968. Martin’s son, Lloyd Martin, Jr., came on as a plasterer’s apprentice in 1967 after graduating from the Engineering School at Ohio Northern University. He rose to plasterer foreman and later superintendent of lathing and plastering, and when his father stepped down in 1998, he took over the company.

Meanwhile, Zombek, Lloyd Martin, Jr.’s son-in-law, originally joined the old Henderson venture as a warehouse employee. By 2007, he was chief estimator for the company’s drywall division.

Martin-Zombek Construction Services was incorporated on June 19, 2009. But that change didn’t mean they were abandoning their roots.

“I think it starts with the original creator of the business, Lloyd Martin, Jr.” Zombek said. “He’s really a great teacher and mentor for everyone here. Every employee really learns a lot from him everyday.  When people ask where I went to school, I simply respond, ‘Lloyd University.’”

Meanwhile, Zombek brings more of an eye for innovation.

“There are no bad ideas in my mind,” he said. “They’re only things to build off of. I like it when people question what or why we’re doing something, because it creates an opportunity for us to change and to develop into something greater than what we were.”

Zombek said while the company’s history informs what they were, embracing new technology keeps them at the forefront of their field.

“I think the trick to technology is not just accepting it, but it’s also to utilize and implement that technology properly,” he said. “We review systems and techniques to find the best idea that we think will fit for us.”

One of the biggest advances the construction industry has seen in recent years is the advent of digital layout using computer-aided design (CAD), which provides a more accurate layout from the architect.

“This makes sure that the ‘lines’ of design are best brought to life,” said Luke Capria, Preconstruction Manager for Martin-Zombek.

CAD files allow the construction industry a better insight into the project before carpenters ever set foot on site, making the building process more efficient from start to finish.

“We can see the potential issues and we can address those issues well before we install a single piece of material,” Capria said. “This is not only a great service to us, but also to the general contractor, architect and the owner. The more we can clear up beforehand the better the product is for everyone involved.”

Since the CAD files provide an accurate baseline for where the architect intended for each partition to go, onsite laser layout can communicate with foremen in real time.

Zombek said it’s critical for a business to be able to roll with technological changes.

“As with all businesses, nothing can be stagnant,” he said. “If you’re stagnant, you die. So we’re constantly looking for new opportunities.”

Martin-Zombek keeps up on the latest trends in the business through Fails Management Institute (FMI) Training Seminars and Peer Groups.  Leadership position employees receive training and benefits via executive training and relationships forged with peers across the country to glean new and innovative solutions to problems ranging from daily headaches to big picture industry trends.

While Martin-Zombek’s business originated with lath and plaster and ultimately moved into drywall, Zombek said he thinks the next step is prefabrication; even now, Martin-Zombek exerts considerable effort in the pre-construction sequence.

“We only have a limited amount of time to be onsite for a project,” Zombek said. “The more pre-planning we can do equates to more time we have on the project in the field. Focusing on the problems before they occur eliminates onsite issues that not only cause delays in our work, but also fellow subcontractors work.”

“One innovation we are implementing is taking that two-dimensional product [drywall] and turning it into a three-dimensional product for installation in the field,” he said. “By prefabricating shapes and forms, we can utilize better quality and reduce time in the field.  Therefore we’re saving on schedule and improving quality at the back end of projects. I believe that’s where the future lies.”

The right job for the right man

Martin-Zombek applies those technologies to projects from Massena to Binghamton, as far west as Rochester and as far east as Albany. Services include framing, drywall, fireproofing, acoustical ceilings, Division 10 Specialties and finished carpentry.

Martin-Zombek’s largest recent project is the New York State Fair Expo Center, which was completed in 2018.

“This was an exciting project as well as a challenging project,” Zombek said.

Because of Upstate New York’s weather and the upcoming start of the New York State Fair in August, all trades were pressed for time. Martin-Zombek worked with other trades and pushed through to complete this large Exposition Center on time, making use of pre-job problem solving meetings, digital layout, prefabrication and specialized lifts. In the end, Zombek said the project was very rewarding.

“It pushed us to refine techniques in our business and in the field,” he said.

Martin-Zombek looks to attract clients with what they call the “Success Arrow,” a three-pronged approach that focuses on safety, productivity and quality.

“Safety, production and quality are the three ever-present goals to our success,” Zombek said. “By optimizing each, we fulfill the final achievement which is client approval and happiness.”

While satisfying the client is important, Martin-Zombek is also dedicated to keeping its employees happy.

“We want to be known as the company of choice amongst employees,” Zombek said. “One of the philosophies that Lloyd has taught me is to never hire an employee for the job, but instead, find a job for the employee. So we find the key employees and create a position for them to succeed in.”

An example of hiring a key employee was a finish carpenter who might not be trained to hang drywall, which is the main focus of Martin-Zombek’s business. “We can build a business around that employee,” Zombek said. “So I think that’s one of the leading reasons for our success in the past and it will be in the future as well.”

Moving into the future

In the end, Zombek said he looks forward to continuing to create innovative solutions for our clients. That’s what drew him to the business in the first place.

“It’s a business like no other in that there is value that’s tangible at the end of the day,” he said. “There’s work that can be put in place and be visual immediately so you get the impact from a day’s worth of work. People need to see the results of a hard day’s work. Seeing something you had a part in building that you can touch, see and share with friends and family for generations is so amazing and that inspires us to keep our focus on all of the positive attributes that we’ve accomplished and look forward to accomplishing for decades to come.”

The Growing Demand for Prefabrication